A Day In The Life Of A Fibro Warrior.

Did you know that May is Fibromyalgia Awareness month? As a sufferer of this debilitating illness, I try to spread awareness throughout the year, since it is still so misunderstood. There are many people, (- including doctors I have dealt with in the past! -)  who refuse to acknowledge that it even exists, blaming the symptoms on either other causes, or indicating that patients are making it all up. Thankfully, more and more research is being done, and there are now tests that prove its presence in your body. Hopefully this means that one day soon there will be, if not a cure, then at least a treatment that works!

As you can see, I have a lot to say on this matter, so please bear with me as I rant a little today. I would like to describe some of what I go through on a daily basis. I know that I am far better off than many people, and I am in no way trying to negate what other people experience with other diseases, I'd just like to tell a bit of my story, since most people have no idea about this disease.

Fibromyalgia affects everyone differently, and can flare up and go into remission, but I personally feel as though I’ve been having a “flare up” for about 8 years now. It affects your sleeping patterns; particularly your R.E.M and deep sleep cycles, meaning that you are never fully rested. “Tired” doesn’t begin to describe the overwhelming fatigue that I face every day. All too often, I have to take a two-to-three hour “nap” in the day, even though I’ve done nothing more strenuous than sit at my computer. The constant pain is debilitating, and combined with the fatigue, I feel as though I have been draped in a blanket of wet concrete that is weighing me down, making every movement difficult and more strenuous than it needs to be. Have you ever had to take a break while brushing your teeth, because your arm is just too tired and sore to stay raised for three minutes straight?? Well, I have. I have to take breaks in the shower too, as raising my hands above my head to shampoo my hair is just too much sometimes.

Having Fibro is often likened to flu-like symptoms, but that just doesn’t really cover the breadth of them. However, if you have ever had a really bad bout of flu, where you couldn’t get out of bed, had a blinding headache, sore throat, cold, muscle aches, vomiting and diarrhea, chills, sweats, fever, when even your eyeballs seem to hurt, just imagine feeling like that every single day, with no hope of ever getting better!

The pain and fatigue are the two main symptoms, but Fibro also comes with a host of other problems. One of the worst is something they call “Fibro Fog”, a feeling of cloudiness in the mind that prevents you from remembering things that were just said, as well as causing dysphasia, when you say the wrong word/name, even though the correct one was there in your brain, your mouth says something different! This also happens to me in writing/typing. I know exactly what I mean to write, but often end up typing/writing a word that sounds similar, but is spelt completely different. For someone with my level of OCD, this is immensely frustrating! Understanding simple instructions becomes so much more difficult too. Don’t ask me to remember directions these days! People get frustrated with me when I repeat a question ten seconds after I’ve already asked it, but imagine how frustrating it is to feel trapped inside this fog? I was always an intelligent person, but these days I just feel like I’m getting more and more stupid.

Most people with Fibro also have some level of IBS/IBD, so on top of all the other issues, your GI tract no longer works as well as it used to. This has long lasting effects, because no matter how well you eat, you are not able to absorb the nutrients efficiently anymore, nor any oral medications you might be on. Can you imagine how this would also affect your day-to-day well being?

As for the mental issues that come with Fibro, obviously, you would expect most people who suffer so much pain and fatigue to have some level of depression. The feeling of helplessness, knowing that there is no cure, and that the symptoms are only going to get worse as you age, is extremely scary. The anger I feel, that this disease has stolen so much away from me, is immense. I used to be a very active, healthy, vibrant person. I used to go rock climbing five times a week, walk for miles every day, and face every new challenges with excitement. Now I need to take a nap after a short trip to the grocery store, because that is just too much effort! I have so much anxiety, because I want to do so much, and feel like I’m letting everyone down, including myself, because I just can’t do as much as I want to these days. Of course, I have a few good days, and then I overdo it, because I want to fit so much in while I am able, but I know I could well be bed ridden for a week after. These are the choices we have to make though.

There are dozens of other symptoms that go hand-in-hand with fibro, including heightened sensitivity to external stimuli… noise, smell, pressure, weather, temperature, etc. Being unable to regulate your temperature as well as you used to is another… The slightest exercise can cause sweats, shaking and heart palpitations, while the chills and shivers for no reason can be alarming too. Combined with this, my extremities will swell and shrink throughout the day, enough so that it is sometimes unbearable to wear shoes, and rings that fit in the morning, will fall off my fingers later on in the day. Strange muscle spasms and cramps aren’t fun either, especially when they happen when you’re lifting something. I can’t tell you how many times something has fallen out of my grasp because my hand spasmed, and it’s heartbreaking to smash a family heirloom because of this “clumsiness”!

There are also skin disorders, strange rashes and unbearable itching, dry eyes and mouth, tinnitus, dizziness, vision problems and more…
Ugh… I could go on all day. I apologise for the ranting, but as you can imagine, sometimes I need to vent about all of this! Like I said before, everyone is different, but this is a little glimpse into my life these days, in honour of Fibromyalgia Awareness month, I am trying to spread awareness.

On a more positive note, I have created a range of jewelry and bookmarks for Fibro Awareness. You can find them in my Etsy shop, OriginalSinArt. 25% of the sales price of these items will be donated to the NFA, National Fibromyalgia Association, which does splendid work spreading the work and looking for a cure. You can find their website HERE if you would like some more information. Thank you for listening! 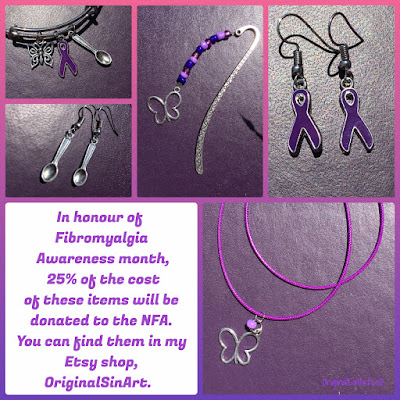