Happy St. Patrick's Day my lovelies! I know that most of you won't be able to celebrate in the ways you are accustomed to this year, due to the Coronavirus and self isolation, as well as most gatherings being cancelled or banned. Did you know that all the pubs in Ireland have been closed?! I worry far more about the affect this will have on the economy than I do about getting sick. Personally, I never experienced the crazy shenanigans some people expect today, until I moved to America. And it came as a big shock! I'll let you in on a little secret: Nobody drinks green beer in Ireland! Also, it's Patrick, or Paddy. Never, EVER, Patty!

My first St Paddy's Day here, my ex insisted on going out. We went to a dive bar that was playing reggae music. Not exactly traditional. Luckily for me, they were already out of green beer, and I was more than happy to drink Guinness instead. I was accosted by a huge Jamaican man with waist length dreadlocks from the band, for not wearing green. I pointed out that I was the most Irish thing in the room, but apparently that's not enough in this country. And I got pinched! That was new to me too.

Tonight, since I forgot to stock up on Guinness, I will most like be drinking cheap wine out of a Guinness pint glass, and watching Dropkick Murphys live stream their annual Boston concert, since they can't do the show in person. I am also wearing shamrock socks, so no pinches for me!

Here are some photos of my last trip to Donegal. These are the things I think about when I think of Ireland. It's not just about the green beer and wigs. To me, Ireland is blue waters, golden sands, grey rocks, and yes, the ubiquitous Black Stuff, as well as every shade of green that you can imagine. It's warm sun, cool mists, swimming in freezing waters, and bonfires on the beach. It's live music, beautiful singing, poetry, and a good craíc. It's long hikes and warming up in a cozy pub afterwards. It's castles and pirates and a history both bloody and beautiful. I never lived there, but it is home. And I plan on moving as soon as I can make it happen. 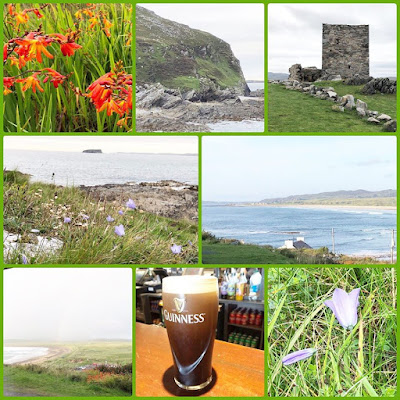